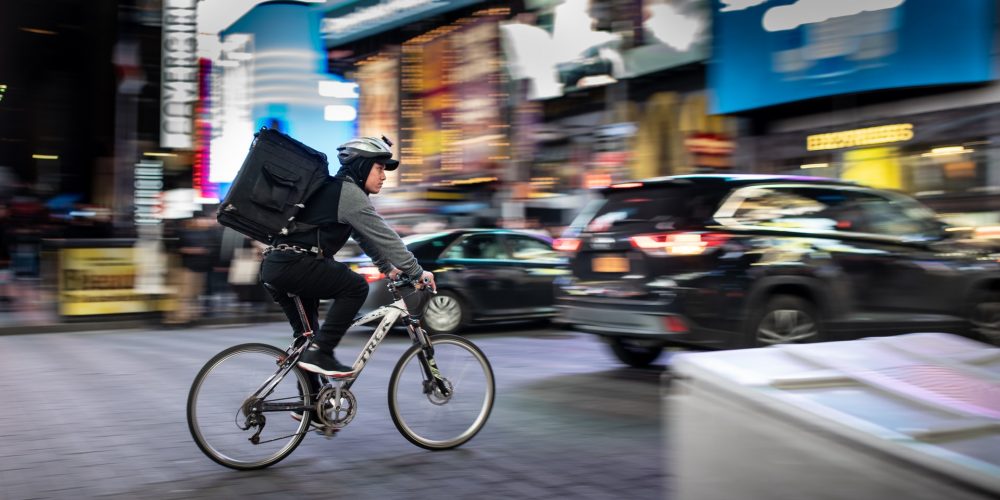 Eliott Wertheimer May 5, 2020 No Comments Uncategorized

Delivery bikes have become a common feature of our city streets. Ideally suited to densely populated urban areas, bikers deliver everything from takeaways to medical supplies. The addition of an electric motor only serves to increase their functionality, and the likelihood of them being an integral part of tomorrow’s logistics system. In this post, we will outline the role of eBikes in modern urban areas, and the advantages they hold over current methods of transport.

The problem with vans

In spite of a decline in private car ownership, urban congestion has increased over the last decade.

David Brown, CEO of Go-Ahead London (one of the companies that manage the capital’s buses), stated that traffic has increased by 14% across UK cities. This is likely a result of the rise of the ‘light commercial vehicle’; according to The Guardian, van journeys have increased by 25% in the past decade, due in part to a boom in online shopping.

And they’re not just clogging up our roads, but also our lungs. Statistics from the Department of Business, Transport, and Industrial Strategy show that in 2018, the average emissions for vans were 262gCO2/km compared to 140gCO2/km for a diesel car, and 154CO2/km for a petrol car (ref. 1)

It’s clear, then, that vans are bad news. eBikes, on the other, could be the solution. Not only do they take up less space on our roads, but they also don’t emit greenhouse gases.

They’re also more than capable of dealing with the delivery capacity of vans. The Bicycle Association reports that as much as 30% of van deliveries could be shifted to eBikes right away, and this is only going to increase with changes in how cities are designed and how delivery companies operate. Rather than having large, out-of-town distribution centres, many online retailers will have smaller warehouses that are closer to densely-populated areas (Amazon already does this). The future of inner-city logistics is therefore likely to be built on a ‘micro’ network, with orders being fulfilled and delivered at a short distance from where they’re actually placed – ideal for electric delivery bikes.

Those opting to use electric bikes for their deliveries will also save money. Aside from not having to pay certain costs (including petrol, insurance, and license fees, to name just a few), eBike riders don’t have to stump up the ‘congestion charges’ that are imposed in various cities around Europe. It’s also worth noting that eBikes can be significantly cheaper to buy than vans and other modes of delivery transport, and are often quicker to repair.

Electric bikes can be used for delivery across numerous sectors. A study by The University of Antwerp has highlighted all of the possible market segments of e-cargo bikes for more sustainable distribution in the future:

Electric bikes have multiple uses. Alongside helping to improve our commutes and keep us fit, they can actually be used to deliver items to our homes and workplaces. As a cheaper, greener alternative to vans and cars, and more in-line with the way cities are developing, electric delivery bikes are only going to become more popular in urban areas.

If you’re looking for the next generation of electric delivery bikes, then consider FuroSystems. Inspired by the precision engineering of aeronautical design, our ebikes offer unrivalled performance and riding experience – whether they’re being used for work or play. The Furo Sierra can take on mountain paths as well as city streets, whilst the Furo X is one of the lightest folding eBikes on the market.