Our customer support team is here to help! We currently accept all orders and deliver for free all over Europe. Contact us here for any info!

Eliott Wertheimer June 20, 2018 8 Comments Uncategorized
Today, most electric vehicles use batteries, often based on Lithium-ion or Lead-acid chemistry. These batteries allow to store energy that was produced away from the vehicle and subsequently use that energy to create mechanical motion and make an ebike, car or motorcycle move forward. Hydrogen Fuel cells, a rather old technology, created in 1839 by Sir William Grove and refined through the years, also allow to store energy in the form of hydrogen in order to power electric vehicles.

Like a battery, a fuel cell cell harnesses a chemical reaction to produce energy in the form of electricity. More specifically, Hydrogen fuel cells generate electricity, water and heat from hydrogen and oxygen.

Fuel cells consist in an anode and a cathode surrounding an electrolyte called a synthetic polymer membrane which separates hydrogen and oxygen while only permitting the passage of certain ions (H+ or protons). Hydrogen atoms enter the fuel cell at the anode where they are stripped of their electrons. These electrons travel through the vehicle’s circuit to the cathode in the form of electricity. The positively charged hydrogen atoms (or protons) travel through the membrane to join with the oxygen and the electrons in order to eventually form water. Each individual fuel cell produces relatively low amounts of current and voltage and, like lithium-ion cells, therefore need to be stacked together in series and in parallel to reach the target voltage and max current required by the vehicle they are powering. 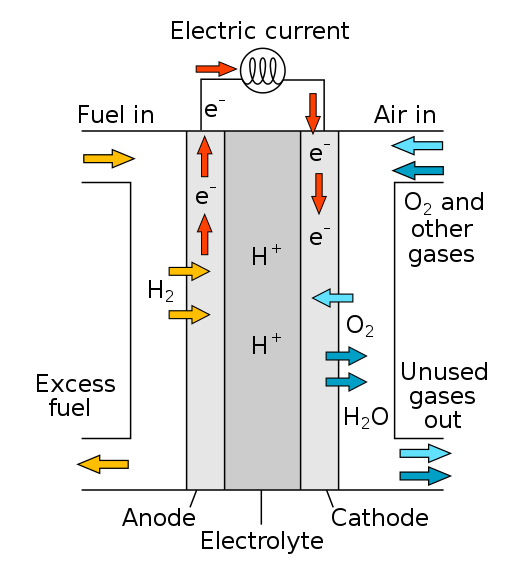 The beauty of hydrogen fuel cells is that you get electricity, heat and (potable) water as outputs with hydrogen and oxygen as inputs. Oxygen is abundant in the atmosphere while hydrogen is the most common element in the universe. However, hydrogen tends to bond very easily with other elements. Therefore, it has to be artificially isolated before being usable as a fuel through processes that are quite expensive and energy consuming.

Hydrogen used in fuel cells has an energy to weight ratio ten times greater than lithium-ion batteries. Consequently, it offers much greater range while being lighter and occupying smaller volumes. It can also be recharged in a few minutes, similarly to gasoline vehicles. However, Hydrogen fuel cells also come with a lot of drawbacks. First of all, hydrogen is mainly obtained from water through electrolysis which is basically a reversed fuel cell and takes electricity and water to produce Hydrogen and Oxygen. The source of this electricity can range from renewables to coal depending on where you are in the world, hence hydrogen extraction can be very clean or dirtier than a typical gasoline car. Nowadays, sadly, it is more likely to be the latter simply because of the way the majority of the electricity is produced on Earth.

Other issues are that storing hydrogen as a gas is expensive and energy intensive, sometimes as much as half the energy it contains, and even more so when it is stored as a liquid at cryogenic temperatures. In addition, it is highly flammable, tends to escape containment and reacts with metals in a way than renders them more brittle and prone to breakage. Eventually, although it is everywhere around us, hydrogen is hard, dangerous and expensive to produce, store and transport.

To conclude, hydrogen fuel cells offer a potentially very clean, energy dense and easy to recharge energy source for vehicles and other systems, but are currently complicated, expensive and dangerous to operate. In comparison, Lithium-ion batteries, although less energy dense and slower to recharge, are as clean, much cheaper, easier and safer to handle. More specifically, cylindrical lithium-ion cells like those used in the SIERRA and the FX are very stable and safe to use. In the future, once the technology is sufficiently developed and the drawbacks mentioned above addressed, hydrogen could be a great solution to increase range and decrease charging time in electric vehicles. But for now, lithium-ion technology is the best solution to offer very practical and high performance ebikes and other vehicles.

Scroll to top
We use cookies to ensure that we give you the best experience on our website. If you continue to use this site we will assume that you are happy with it.Ok